After being mothballed for more than four decades, undergoing two years of extensive renovation, and making a 3,600 mile round trip to the Keystone State, the very first of El Paso’s vintage streetcars is back in the Sun City!

ATS designed and manufactured the propulsion system for the rebuilt El Paso Streetcar System. Based on the highly successful New Orleans Canal Street controllers, the ATS solid state controllers are a vital part of the renovation project taking place at the Brookville Equipment facility in PA.

During this period, the streetcar will run its downtown and uptown loops without a safety escort, according to a press release issued by the Sun Metro Mass Transit Department.Streetcar staff will operate the system’s proposed schedule with no passengers on board as they evaluate “everything from streetcar speeds to roundtrip times,” Sun Metro officials said.The Camino Real Regional Mobility Authority (CRRMA) is responsible for building the 4.8-mile project, including remanufacturing six Presidents’ Conference Committee (PCC) streetcar vehicles that ran in the area until 1974. Sun Metro will operate and maintain the streetcars and associated facilities when the project is finished.

CRRMA also is constructing track, overhead contact system lines, power stations and a maintenance and storage facility, according to the agency’s website. Brookville Equipment Corp. is restoring six PCC streetcars for the system. The $97 million project is slated to be completed late this year.
https://www.progressiverailroading.com

30 March 2018: As reported on the APTA Streetcar and Heritage Trolley webpage:

Car No. 1506 was unloaded on Father Rahm avenue at approximately 10am on March 19, 2018. This marks the first time in about 40 years that a streetcar has been on rails in El Paso city streets. The vehicle was then taken into the Maintenance and Storage Facility (MSF) at 601 South Santa Fe Street for inspection by the Camino Real Regional Mobility Authority and Sun Metro.

While members of the public are not able to access the streetcar at this time, the CRRMA and the City of El Paso will soon announce public events to celebrate the streetcar’s homecoming.

Car No. 1506, part of the fleet of streetcars which ran in El Paso until 1974, is the first of six vintage Presidents Conference Committee (PCC) streetcars to be refurbished and modernized as part of the $97 million El Paso Streetcar Project

El Paso’s fleet of six historic Presidents’ Conference Committee (PCC) streetcars left El Paso on November 12 and December 10, 2015, bound for extensive renovation by Brookville Equipment Corporation in Brookville, Penn. Each of the six streetcars will be painted in one of three vintage color schemes from the 1950s, 1960s and 1970s. Car No. 1506 is painted in the red and green 1970s color pattern. 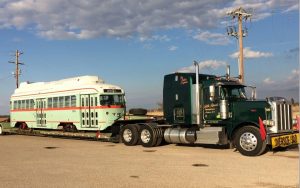