On Friday, August 21, 2015, professional driver Roger Schroer guided the Venturi Buckeye Bullet 3 (VBB-3) to an average two-way speed of 240.320 miles per hour (386.757 kilometers per hour). The new record set by the VBB-3 is pending certification by the Federation Internationale de l’Automobile (FIA), the worldwide motorsports governing body, in Category A Group VIII Class 8. This is the second year the team has competed in this new competition category, which during similarly weather-challenged tests last year set a record in the same category at 212.615 mph (342.171 kph). The ultimate world record for electric vehicles, set by the Ohio State-Venturi team in 2010, is 307.6 mph (495 kph) in FIA’s Category A Group VIII Class 4.

The VBB-3 was required to make two speed runs in opposite directions and within 60 minutes in order to be considered for the international record. While the record is officially determined by averaging the speed of the two runs in the middle of the course, the fastest time the VBB-3 exited the timed middle mile—known as the flying mile—was 288 mph (463.4 kph). 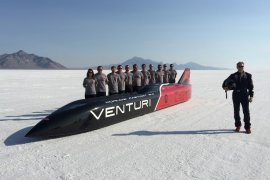 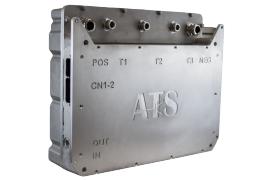